As a developing country undergoing a rapid epidemiological transition, Vietnam is facing a considerable burden of non-communicable diseases (NCD). From 1970-1990, NCD was not a major public health problem in Vietnam; however, since then there have been significant shifts in the pattern of disease and NCDs have overtaken infectious diseases to become the leading cause of morbidity and mortality. According to routine administrative data, the rate of hospitalisations related to NCD rose from 39% in 1986 to 62% in 2012, while deaths due to NCDs increased from 41% of all deaths in 1986 to 68% in 2012.

The first study that estimated Vietnam’s national burden of disease showed that NCDs contributed the majority (71%) of the total burden of disease, which was 12.3 million DALYs. NCDs have become a significant public health problem in Vietnam, and the majority of DALYs lost are due to the four major NCD groups. These NCD groups, which are cardiovascular disease (CVD), cancer, diabetes, and chronic lung disease, have been paid special attention in Vietnam’s health system. 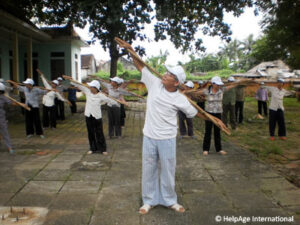 Hypertension is a chronic condition, which is a key metabolic factor associated with an increase in the risk of CVD (WHO, 2013a). In Vietnam, hypertension is among the most common chronic conditions suffered by the population. Findings from three different national surveys in 2001-2002, 2005, and 2008 have shown a considerable increase in the magnitude of the hypertensive population. In the Vietnam National Health Survey 2001-2002, 16.9% of the population were found to have hypertension. This figure reached 20.7% in the National Adult Overweight Survey 2005 and then increased to 25.1% in 2008. Small-scale studies also found similar rates of hypertension, ranging from 16% to 27.3%.

Diabetes is a chronic disease occurring when the pancreas fails to produce sufficient insulin (Type 1), or the body cannot use the insulin that it produces properly (Type 2). In Vietnam, the national study on the burden of disease also indicated that diabetes accounted for 3% of total DALYs, and was one of the leading causes of premature mortality, especially in females. Results from two national surveys show that the proportion of the population with diabetes was 2.7% in 2002 and doubled to 5.4% in 2012. The prevalence of pre-diabetes also rose from 7.7% to 12.8% in 2012. It is anticipated that there will be 3.42 million Vietnamese people suffering from diabetes by 2030, which represents an annual increase of 88,000 people.

In Vietnam, the national health insurance programme was initiated in 1992 with the aim of improving people’s access to health services. For over 20 years of implementing a health insurance programme, Vietnam has experienced some remarkable milestones toward universal health coverage. In October 2017, the government started rolling out health insurance (Resolution 20-NQ/TW)  with the aim of achieving 80% coverage by 2018 and the hope of achieving 95% coverage by 2025 (coverage of 95% of commune, ward and township health stations to provide the basic beneficiary package of health services). With adequate staff and resources, healthcare will be closer to the people, and management of NCDs will be available to all the communities. By increasing the coverage of the national health insurance, the numbers of people who have access to NCD services will increase.

The National Strategy for Prevention and Control of NCD 2015-2025, which was issued by the Prime Minister in 2015, identifies that the provision of primary health care (PHC) services for NCD management is one of the key strategies to control NCD. This strategy is operationalised in Vietnam where patients with hypertension and diabetes are eligible to receive routine outpatient services provided by PHC facilities, including monthly medical appointments, diagnostic tests, medications, and consultations, under their health insurance enrolment.

Hai Duong and Hai Phong are selected to be the study sites of Vietnam SUNI-SEA project. They are two neighbouring provinces located in the Northeast region of Vietnam.

Hai Duong and Haiphong are among the most populous provinces in the region with the population of around 2.5 million citizens each, with 75% and 50% of the population living in rural areas, respectively. Despite the fact that there is no provincial-level data on the prevalence of common NCDs, some small-scale studies conducted in these provinces indicate the high prevalence of hypertension and its associated risk factors in the study sites.

Community-based services in the study area:

Intergenerational Self-Help Club (ISHC) model is a community-based intervention project which centres around the elderly, aiming to promote the livelihood and the role of elders in their communities. The ISHC model has been developed by HelpAge international in Vietnam, and in 2016, the prime minister announced the Decision 1533/QĐ-TTG which stated that local governments need to allocate funds for the establishment of ISHC throughout the country; mass organisations and local agencies such as the Father Front Land, Women Unions or Elderly Associations will take the lead in the implementation of the Decision. Hai Phong and Hai Duong have been among the leading provinces to embrace the model. Each province has a good number of ISHCs (Hai Phong: 65 ISHCs and Hai Duong: 51 ISHCs).

In health care, the ISHC provides a way of delivering health promotion activities through the synergies between the model and the local health facilities. It also provides home care services through its volunteers, or in some cases, its paid care assistants. The selection of study sites where the community groups have been well established is a crucial foundation to ensure that both the retrospective and prospective studies will be developed and scaled up in a coherent manner.

The study teams leading research work in Vietnam include Health Strategy and Policy Institute, Thai Nguyen University of Medicine and Pharmacy, and HelpAge International (Vietnam Country office). The team will work in collaboration with the Ministry of Health and relevant departments; Vietnam Social Security; Vietnam Association of the Elderly as well as local authorities including Provincial Health Department and community associations (e.g., Elderly Association).

Minh, H.V., et al., Risk factors for chronic disease among rural Vietnamese adults and the association of these factors with sociodemographic variables: Findings from the WHO STEPS survey in rural Vietnam, 2005. Preventing Chronic Disease, 2007. 4(2): p. A22.