Myanmar borders Thailand, Laos, China, India, and Bangladesh in south-east Asia. It has an estimated population of 51.41 million. There are over 135 different ethnic groups residing in 15 states and regions.

Myanmar is one of the poorest countries and faces many healthcare challenges. At 64.7 years, life expectancy at birth in Myanmar is one of the lowest in the region. Myanmar faces the twin challenges of meeting the basic health needs of the people while tackling a range of non-communicable diseases (NCDs) that have become increasingly prevalent in the past decade.

NCDs are more common in older people, and as Myanmar’s population grows older, their prevalence is growing. In 2018, NCDs accounted for 68% of deaths in Myanmar, up from 36% in 1990, according to the WHO. Unhealthy lifestyles, including tobacco and alcohol use, poor diets and lack of physical activity are common in Myanmar, and these risk factors are leading causes of multiple NCDs. Almost all adults in Myanmar (94%) are exposed to at least one NCD risk factor, and 20% of the population live with three or more. 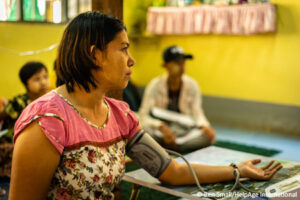 Tobacco use among men is particularly high, with 44% smoking tobacco and 62% using smokeless tobacco, such as chewing betel nut. As for diets, 86.6% of men and women consume less than the recommended amount of fruit and vegetables per day. Around 20% of people drink alcohol, especially men. The prevalence of being overweight and obese were 22% and 5%, respectively.

WHO data reveals that 26% of women and men have raised blood pressure, putting them at risk of heart attacks and stroke, and the prevalence of diabetes is 10.5% among adults aged between 25 and 64.

Myanmar’s health system is severely underfunded. According to the World Bank’s World Development Indicators database, Myanmar spent 2.3% of its GDP on health in 2014, compared to 6.5% among countries in the East Asia-Pacific region, and 5.7% among other low-income countries. However, spending on healthcare is increasing – in 2005, it was only 1.8%. As a result of low investment, out-of-pocket payments for health services in Myanmar are among the world’s highest, accounting for 81% of the total healthcare expenditure, compared to 14% in Thailand and 43% in the region.

In 2017, Myanmar’s National Health Plan 2017-21 was launched with the aim of expanding basic health services, increasing the availability of services and reducing out-of-pocket expenses. The Government has also committed itself to achieving universal health coverage and full health insurance coverage by 2030.

To address the challenges posed by NCDs, the Government has created an NCD unit within the Ministry of Health and Sports’ Department of Public Health and has been expanding a package of essential non-communicable disease interventions (PEN), which includes inexpensive methods for detecting and diagnosing NCDs early, approaches to modify NCD risk factors, and affordable medicines. It has been introduced to 220 townships to date, with plans to reach all 330.

The National Strategic Plan for Prevention and Control of NCDs (2017-2021) has been implemented, with support from HelpAge International, to progress work on NCDs and make it a health priority, monitor trends, and tackle risk factors. A lack of funding for NCD programmes, and a lack of partnerships across different ministries and stakeholders remain challenges in delivering this plan.

Around 70% of Myanmar’s population lives in rural areas. There are approximately 30,000 doctors and 55,000 nurses and mid-wives serving over 51.4 million people, but less than half of these doctors work in the public sector, making it very difficult to staff the public health facilities in rural areas adequately.

In the study areas at the township level, hospitals have 50 to 200 beds, depending on the township, one medical officer, two to four assistant surgeons and many nurses. At the village level, there are small hospitals with one medical officer, five or six nurses and 25 beds, rural health centres with a health assistant, health visitor, midwife and public health supervisor, and sub-rural health centres with just a midwife and public health supervisor. These small facilities provide general health services. There are no community-based NCD services.

Furthermore, all medical training is provided by government universities in big cities, which limits the availability of trained health staff in rural and ethnic minority areas. Many health facilities require upgrading and refurbishment, including basic facilities and equipment, while inadequate transport hampers effective service delivery, particularly in emergency circumstances such as heart attacks and stroke.

What are inclusive self-help groups?

Inclusive self-help groups (ISHGs) are community-based organisations led by older people. Known as lu hmu ar man (“social capital”) in Myanmar, ISHGs are voluntary, participatory membership organisations, led mainly by older people and those with disabilities. They support villagers to improve the health of community members through promoting healthy lifestyles, regular check-ups and referrals to health centres. They provide low-interest loans and training to support people to build livelihoods so that they have a regular, reliable income. And they help individuals access social protection services, such as social pensions and disability grants.

ISHGs are a more inclusive version of the older people’s self-help group model that HelpAge has implemented since 2009. This redesign focuses on the wider community to include all vulnerable people. This brings together individuals of all ages, allowing younger community members to work with and support older people.

HelpAge International is collaborating with the Department of Social Welfare to add 664 inclusive self-help groups to the existing 136 by 2023, bringing the total number to the 800 target. We are gradually moving from leading in the implementing of the groups to providing technical support to the Government and national civil society organisations, who will take over direct implementation between 2020 and 2023. 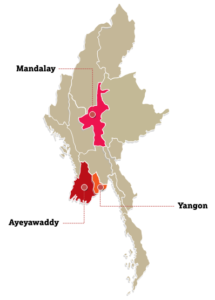 In Myanmar, HelpAge International is working in 150 villages – 75 ISHG “control” villages and 75 non-ISHG villages across Mandalay, Ayeyarwady and Yangon regions, representing the rural dry zone, the rural delta and an urban setting, respectively. It is to ensure diverse geographical context. The total population of these villages is 122,930 people and HelpAge has been working on community development in these areas since 2009.

Considering the COVID-19 pandemic and the recent political instability, the project activities had to be modified to meet the current needs. Those include self-screening for diabetes and hypertension risk factors. The project team also introduced self-screening for potential mental health conditions including anxiety, depression, and PTSD. The synergy between community and health care providers continues to be an essential piece of the work in Myanmar, and referral to health providers would be recommended if the health services are available in the areas. Other health activities include social activities for mental wellbeing, regular health awareness and promotion and community-based homecare service for those most in need.

HelpAge International Myanmar Country Office acts as country coordinator and supports the implementation of all work packages in Myanmar. The research will be conducted in collaboration with a local partner, University of Public Health, and relevant stakeholders including community-based inclusive self-help groups.