Indonesia is an archipelago located in Southeast Asia, consisting of thousands of Islands, with five main big islands: Java, Sumatra, Sulawesi, Kalimantan, and Papua. The population in 2016 is estimated to be 261.1 million. The island of Java has the largest population in Indonesia (57 per cent of the total). Indonesia is facing an epidemiologic transition in which NCDs are increasingly important, while infectious diseases remain a significant part of the disease burden.

In 2018, NCDs are estimated to account for 73% of all deaths (35% due to cardiovascular diseases, 12% cancers, 6% chronic respiratory diseases, 6% diabetes, and 14% other NCDs). Common risk factors include hypertension, smoking and hypercholesterolemia. High prevalence of raised blood pressure among adults aged 18 years and older occurred in 21% and 23% of females and males, respectively.

In response to the increasing burden of NCDs, the Ministry of Health established a unit at directorate level, the Directorate of Noncommunicable Diseases, to lead and manage NCD prevention in the country. NCD programmes are mainly preventive efforts, including health promotion to raise public awareness, formation of community-based health awareness groups, as well as early screening. Indonesia is also still among the countries with the highest smoking prevalence (approximately 44% of adult Indonesians). Several policies on tobacco control have been implemented such as higher excise taxes on cigarettes, introduction of smoke-free public places, stricter regulation of tobacco advertising, and specific packaging and labelling of tobacco products.

To improve health prevention and promotion, the National Social Health Insurance (BPJS Health) has incorporated screening for breast cancer, cervix cancer, type-2 diabetes mellitus and hypertension into the programme. In addition, starting in early 2014, BPJS Health in collaboration with the Indonesian Cancer Foundation launched the National Movement for Early Detection of Cervical Cancer. BPJS Health provides screening at Puskesmas (primary health centres) using pap smears and VIA. More than 50% of the population is currently covered by this health insurance scheme. The government aims to have a social health insurance system covering the whole population by 2019.

The retrospective phase was conducted in three provinces in Indonesia – Central Java, East Java, and North Sumatra. These provinces are among the nine priority provinces for non-communicable diseases prevention based on their disease burdens. Details of each province are as follows:

Meanwhile, for the prospective/implementation phase the study will be conducted in two provinces – Central Java and East Java.

In Indonesia’s health system, primary health care is defined as health-care services that are provided by a non-specialist health-care worker and accessible on a first point of contact basis. Puskesmas or primary health centres are important, particularly in the context of Indonesia’s Universal Health Coverage (UHC) or JKN programme, as the gatekeeper for medical cases as well as public health efforts. The Puskesmas performs a comprehensive set of mandatory services and tasks that include curative, rehabilitative, preventive and promotive services delivered within the facility and through outreach programmes. The Puskesmas focuses on six essential service areas: health promotion; disease control, including immunization and surveillance; ambulatory care; MCH and family planning; community nutrition; and environmental health, including water and sanitation. The Puskesmas serves as a referral from Posbindu, a community-based prevention program for NCDs, if there are residents who require further treatment. 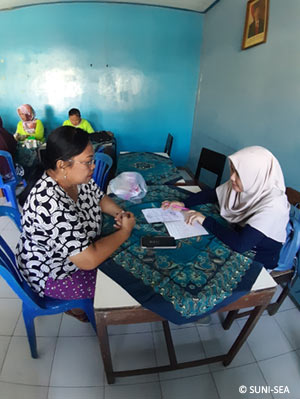 These basic services can be further disaggregated into specific programmes based on local needs. Although all Puskesmas are required to deliver these services or implement these programmes, availability of services often depends on the availability of health personnel. On average, each Puskesmas serves around 30,000 individuals, but numbers tend to be lower in rural areas. Outside Java, catchment populations are also on average smaller, but the catchment areas tend to be larger.

Community-based services in the study area

At the village level, Puskesmas have developed community-based integrated coaching posts named Posbindu (Pos binaan terpadu or integrated development post of NCD). The main goal of Posbindu activities is to increase community participation in prevention and early detection of risk factors for NCDs, targeting all individuals aged 15 years or older. Furthermore, Posbindu aims to provide counselling and other efforts to avoid the occurrence of communities at risk of NCDs. For people at risk, Posbindu intends to recognise existing risk factors and make efforts to reduce the number and intensity of these risk factors to prevent the development of NCDs. Also, Posbindu aims to control and maintain optimal health of patients with NCDs both through preventive (such as counseling) and curative efforts, by strengthening the Posbindu referral system to Puskesmas.

Specific NCD risk factors that are controlled in Posbindu services include hypertension, coronary heart disease, diabetes, cancer, chronic obstructive pulmonary disease, osteoporosis, gout, asthma, stroke, obesity (overweight), kidney stones and others. The Posbindu programmes can be integrated into other community activities, such as those in schools, workplaces and residences.

Universitas Sebelas Maret (UNS) supports the implementation of all work packages in Indonesia. UNS acts as the country coordinator for Indonesia and will lead on the research work in Indonesia in close collaboration with all associated partners in Indonesia, Ministry of Health and BPJS Health.